Today I delve into the history of The British Isles. Why are there so many names? What’s the difference between England and Britain? What about The UK? Let’s learn about it all together today! 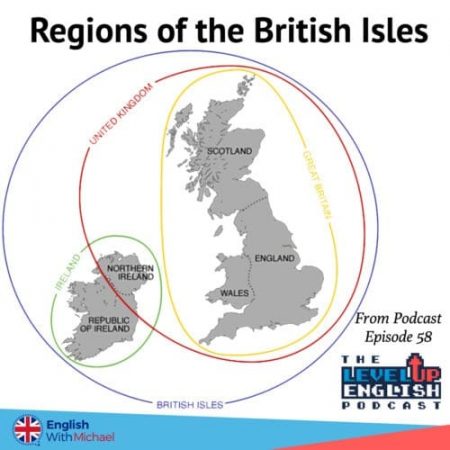 Roman control of the island ended in 410.

One reason the roman’s left was because of constant invasions from the Angles and the Saxons (Denmark/German border region).

The Angles and Saxons took control in around the year 450.

In 927, the country was united as the Kingdom of England. That’s when England first became a country.

Wales was conquered in the 13th Century,

In the 1530s, King Henry VIII made Wales have the same laws as England, making it more official.

Ireland became a kingdom of England in the 1540s.

Scotland and England eventually became one country in 1707 under Queen Anne.

1801 was the creation of the United Kingdom of Great Britain and Ireland.

The Irish War of Independence ended with the separation of Ireland into northern and southern regions in 1922.

The northern region remained a part of the UK. The southern region became the Irish Free State.

In 2014, Scotland voted to leave the UK but lost by 55%. Brexit also made relations tricky, as the majority of Leave voters were from England, while Scotland and Northern Ireland largely voted to remain.

Today, you can freely travel between Wales, Scotland and England. The culture is fantastic to see as you travel through such a small country with such big differences. I highly recommend visiting these regions if you come to the island!

We use cookies on our website to give you the most relevant experience by remembering your preferences and repeat visits. By clicking “Accept”, you consent to the use of ALL the cookies.
Cookie settingsACCEPT
Manage consent

This website uses cookies to improve your experience while you navigate through the website. Out of these, the cookies that are categorized as necessary are stored on your browser as they are essential for the working of basic functionalities of the website. We also use third-party cookies that help us analyze and understand how you use this website. These cookies will be stored in your browser only with your consent. You also have the option to opt-out of these cookies. But opting out of some of these cookies may affect your browsing experience.
Necessary Always Enabled

Any cookies that may not be particularly necessary for the website to function and is used specifically to collect user personal data via analytics, ads, other embedded contents are termed as non-necessary cookies. It is mandatory to procure user consent prior to running these cookies on your website.

SAVE & ACCEPT
Scroll to Top